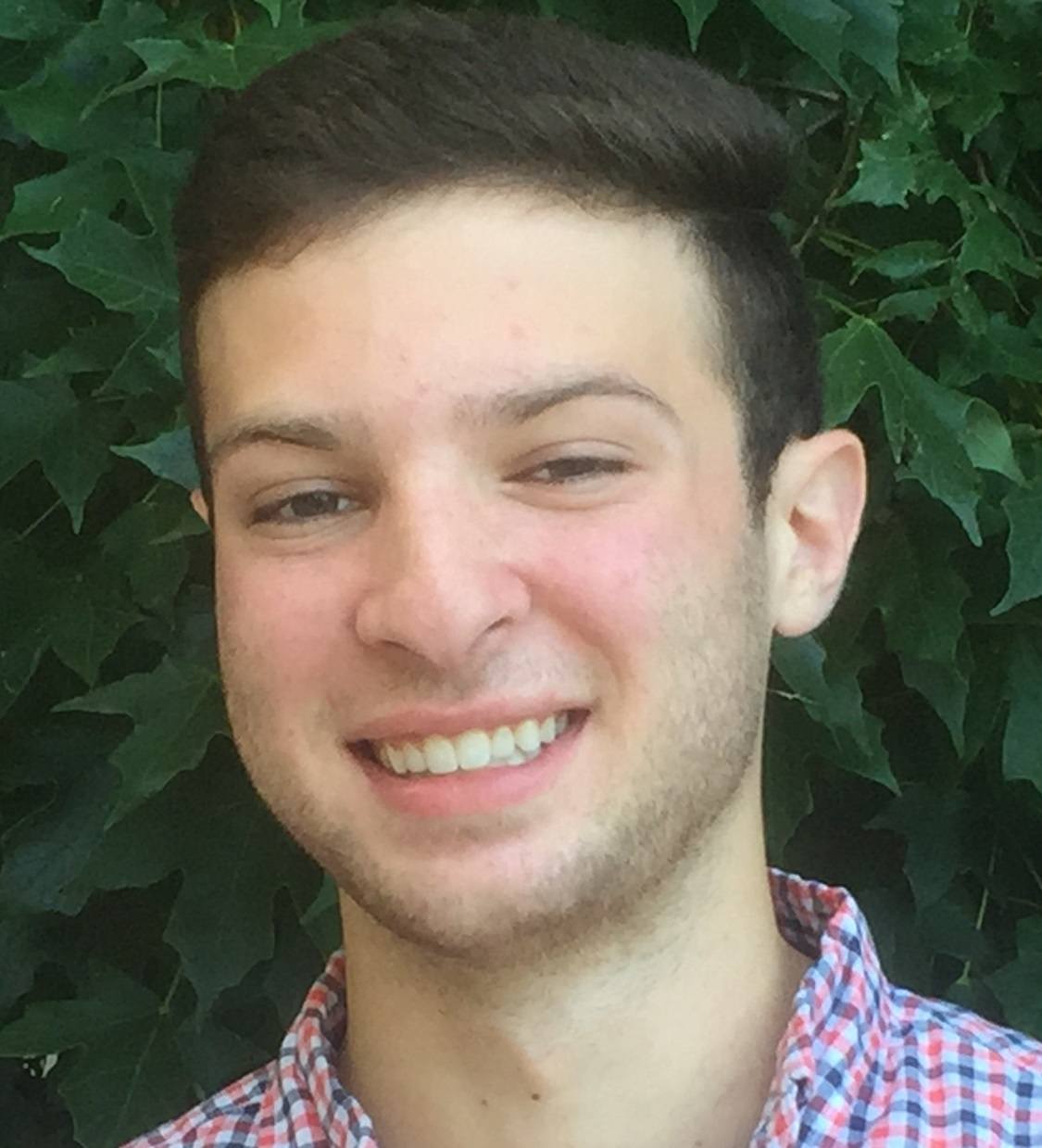 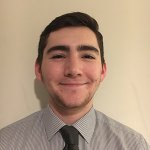 The cryptocurrency revolution has taken the world by storm – in fact, Bitcoin exchanges such as Coinbase have more registered users than stock brokerage Charles Schwab.

Although it can be confusing, understanding Bitcoin and cryptocurrencies in general is incredibly important. Blockchain technology is changing the way we live.

If you’re looking to expand your portfolio by investing in the 21st century’s hottest new commodity, you’ve come to the right place.

How to Buy Bitcoin

Bitcoin is a valuable commodity – no wonder you want to buy some!

If it’s your first time trying to buy Bitcoin, the process may be a bit tricky for you.

Don’t worry, we’ve got you covered! This Bitcoin buying tutorial was made for first time buyers. We’ll walk you through the buying process, step-by-step, with pictures.

Finding an exchange is the first step in the Bitcoin buying process. There are plenty of exchanges to choose from, including Coinbase, Gemini, and Coinmama.

Coinbase is a very beginner friendly US based exchange. They sell cryptocurrency to most countries and all US states. They charge a 1.49% fee on bank transfers and 3.99% fee on credit and debit card purchases.

We’ll be using Coinbase for this tutorial – however, this is not the only exchange out there.

Fill out the required fields, and create your account. You should receive an email confirmation message: 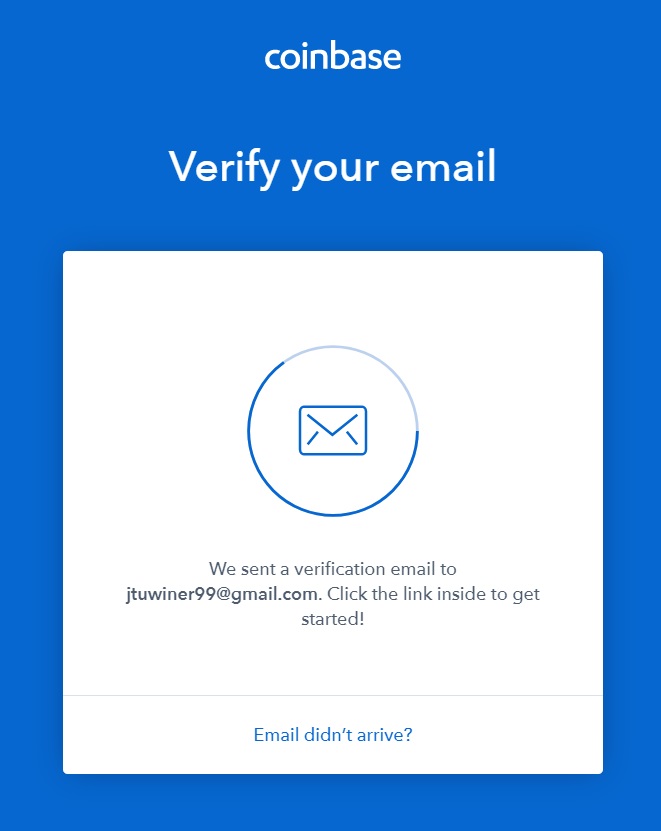 Coinbase will send an email to the address you provided previously. Check your mailbox, and verify your email address.

Next, Coinbase is going to want your personal phone number. Don’t worry, they won’t give it away or spam you – rather, the number is used for verification purposes. They’ll text you a security code which you are required to enter on screen.

From then on, a new verification code will be messaged to your phone and required before any large transactions occur.

The next step of the sign up process is ID verification. Coinbase requires its users to be 18+ years of age. Furthermore, a government issued ID is required. This includes your state driver’s license. Coinbase walks you through the process – simply take a picture of your ID using your phone, upload it to Coinbase, and wait for them to verify your ID.

Once your account setup is complete, you’ll be brought to the dashboard. To begin the buying process, click the “Buy/Sell” button in the navigation bar.

From here, you can deposit cryptocurrency to your account, or sell it for a regular fiat currency such as USD. 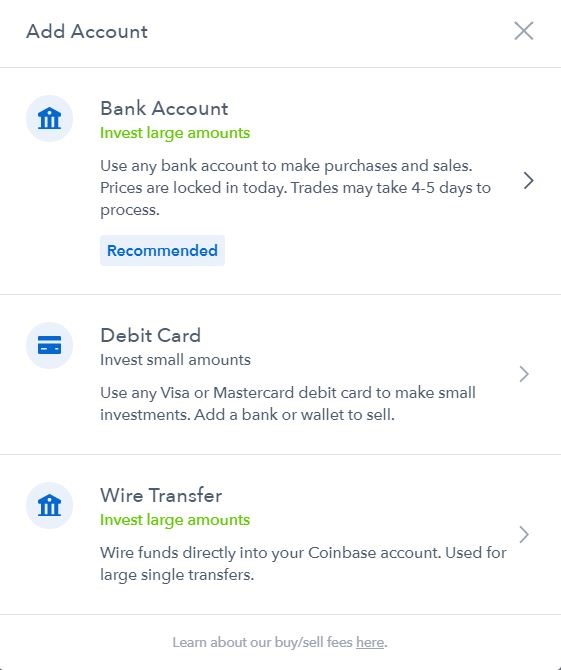 All that’s left to do is make your purchase! Coinbase supports the exchange of Bitcoin, Litecoin, Ethereum, and BCash. 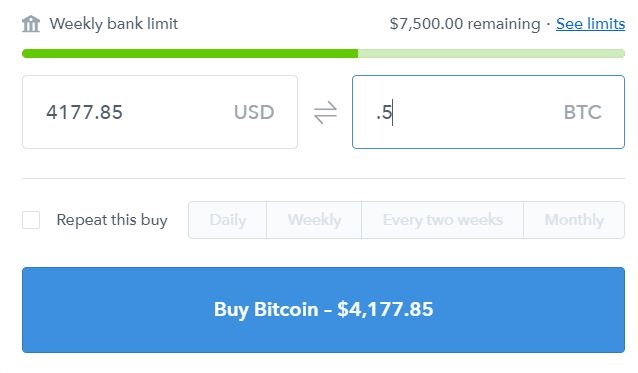 It’s important to note that Coinbase charges a fee for every trade, and it’s pretty hefty. They take a 1.49% commission on bank transfers and a 3.99% commission on any transaction made with a credit/debit card.

Coinbase is designed for beginners – their platform is simple and easy to understand. They charge high fees for their simplistic platform. However, it’s still a great option for first-time buyers without any experience in the cryptocurrency space. Overall, they’re a reputable company offering a great service.

Taking a Closer Look: What is Bitcoin?

Bitcoin is a form of digital currency known as a cryptocurrency. It exists entirely in software, and has no physical form.

Bitcoin was the first cryptocurrency ever created, and it was built on a few core principles:

The blockchain is a digital ledger that contains the history of all Bitcoin transactions. This ledger is shared with everyone interacting with the blockchain network.

Every computer on the Bitcoin network has a copy of the blockchain downloaded. These computers are called nodes, and they share information among each other. This is the key to many of Bitcoin’s principles.

Distributing the blockchain to many computers prevents one central authority from holding all the power, decentralizing the network. 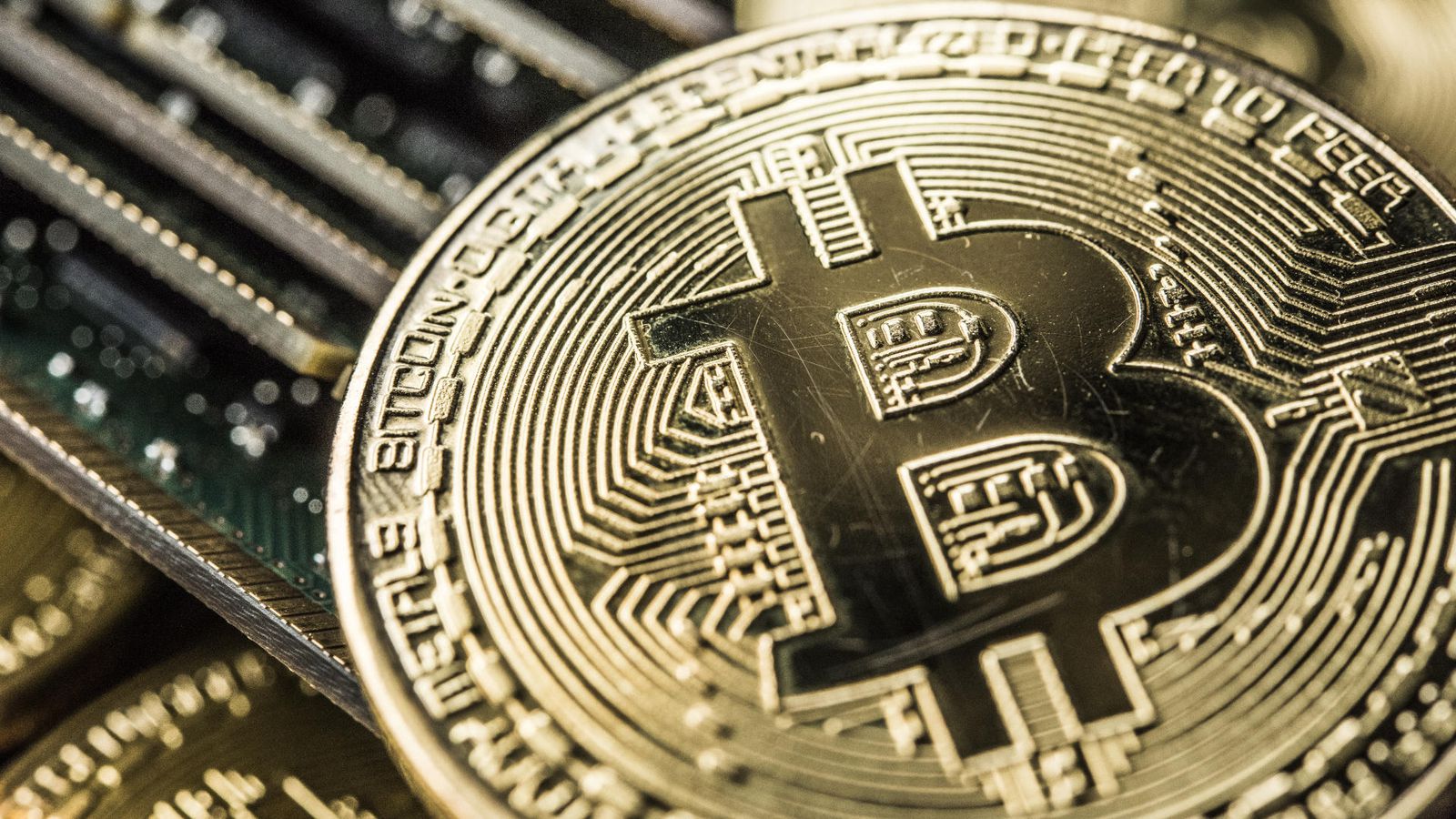 The other massive benefit of the blockchain is immutability. If one hacker attempts to alter the blockchain to credit coins to himself, he may succeed in altering the blockchain on one or a few computers. However, the network will ignore this change, since the majority of computers were not altered.

The principles of decentralization and immutability help keep bitcoin fair for all.

Transactions on the blockchain are not recorded automatically, though. Such a task requires time and energy, which is why Bitcoin implements mining in order to power and verify the blockchain.

Transactions on the blockchain are verified by Bitcoin miners, who are in turn rewarded with bitcoin.

But what exactly do Bitcoin miners do?

Miners verify blocks on the blockchain. A block is a set of Bitcoin transactions that takes up 1 MB of data. The size of each transaction varies greatly and one block may be hundreds or thousands of transactions.

Because every different input will result in a different output, the outputs are almost impossible to predict. In order to verify a block, miners must find an input that generates a 64-digit hash value equal to or lower than than the target.

Due to the randomness of the hash values, the only way to find the right input is to guess. Miners use hardware ASIC miners to perform millions of guesses, or hashes per second. 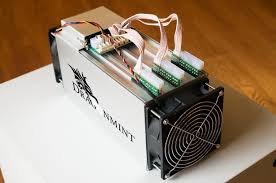 This is known as Proof-of-Work (PoW). Miners perform time-consuming work that is easily proven.

PoW prevents the largest Bitcoin holders from controlling the network, instead giving it to anyone with the ability to mine.

The first miner to successfully verify the block receives a reward in the form of Bitcoins, which incentivizes miners to continue verifying transactions. The reward was initially 50 Bitcoins, but that number halved in 2012, then again in 2016 to 12.5 bitcoins. In the year 2020, it will half again and so on.

When a block is verified, it is added to the blockchain. The next block includes the hash of the previous. This helps to with the principle of immutability, because if someone wanted to change a block, they would have to change all of the following blocks too.

The concept of mining also introduces the principle of scarcity to Bitcoin.

Because the reward for mining is halved repeatedly, the total number of Bitcoins that exist will never exceed 21 million. By the year 2140, all Bitcoins will be mined, and miners will only receive transaction fees for verifying blocks.

The scarcity of Bitcoin helps drive its value. While the demand for Bitcoin is high, the supply is low, so the value increases.

So who’s the genius behind the whole thing?

As it turns out, no one knows.

In 2008, a paper called “Bitcoin - A Peer to Peer Electronic Cash System” was sent out to a cryptography mailing list, by Satoshi Nakamoto. The paper described a currency that was independent from any banks or central authorities.

On January 3, 2009, Bitcoin’s first block was generated. In 2010, one of the first real-world transactions occurred when a bitcoin enthuisast on the Bitcoin Talk forum offered to pay 10,000 bitcoins for 2 pizzas. The value of those bitcoins today is over 70 million dollars.

Bitcoin and the Dark Web

The Silk Road launched in 2011. It was an online marketplace for drugs that used bitcoin as its main form of currency to protect the identity of users.

The Silk Road was later shut down, but it was one of first websites to display the power of anonymity that bitcoin had. 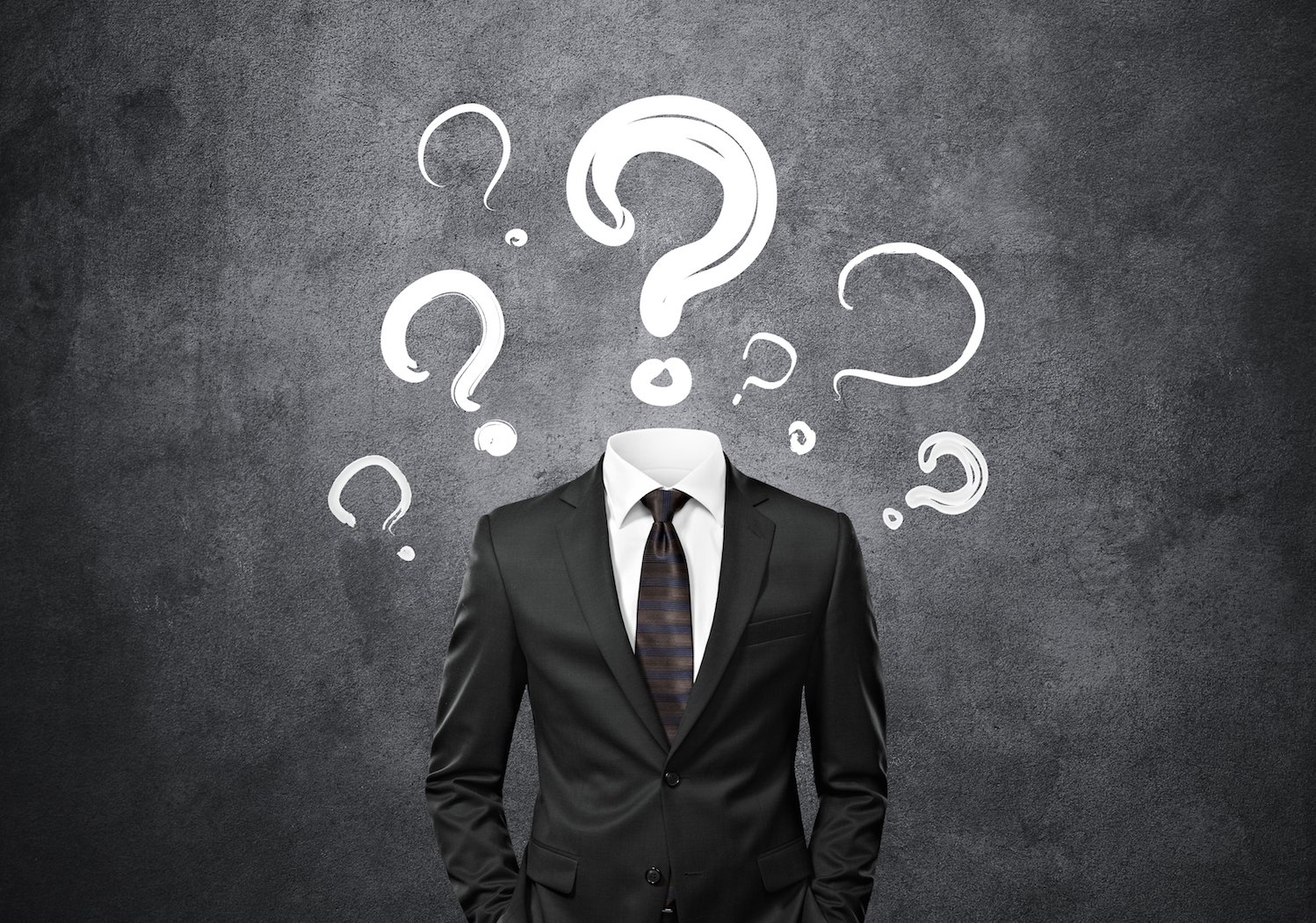 On April 23, 2011, Nakamoto sent an email to Bitcoin Core developer Mike Hearn, saying that “I’ve moved on to other things.” After this, Nakamoto disappeared from the scene. Since then, many have claimed to be him, and many others have been speculated to be the creator of Bitcoin.

In the following years, Bitcoin continued to grow and exchanges began to pop up. To this day though, no one knows the true identity of the individual or individuals behind Bitcoin.

Bitcoin was the first cryptocurrency ever created, and it began a digital currency revolution. The introduction of a decentralized, immutable, and pseudoanonymous currency has many applications, and its potential is only just starting to be realized.

The blockchain was also first successfully implemented in Bitcoin. Bitcoin has spawned many competitors, and driven innovation in the financial technology sector.

Blockchain technology itself may have even further-reaching ramifications, as it could drastically alter fields like supply-chain management, information technology, insurance, and asset management, to name a few.

Regardless of the value of Bitcoin, its impact cannot be understated. The technology and principles behind Bitcoin and the blockchain will change the world, and impact humanity for the better. And you can’t put a price on the betterment of society.